Central Ohio’s largest LGBT Bowling League is in full swing and heading into their third week of bowling. “The Sunday Brunch” league bowls every Sunday at H.P. Lanes at 2012 Innis Rd in Columbus @ 3:00pm. The league is at a 34 team count and is always welcoming new teams at the start of the season. This is my 7th year bowling with the league. It has allowed me the opportunity to make great friends.

The Sunday Brunch league not only offers bowling for members of the LGBT community in a safe environment, but it also gives back. Members pay dues throughout the year which cover the cost of the use of the bowling alley, but a portion of these dues are used to create a Prize Fund and a Charitable Giving fund. Each year players compete to be ranked in the top spots. At the end of the season the top teams compete for ranking and to receive a portion of the prize fund for their achievement. Teams also vote on a  number of charities to receive funds from the charitable giving fund.

Sunday Brunch not only welcomes members of the LGBT Community, but also has numerous Allies as returning bowlers each year.

Spectators and fans are welcome to join us every Sunday at H.P. Lanes @ 3:00pm. 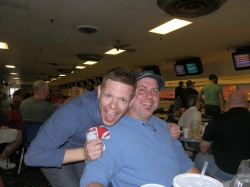